The goal is to complete all the levels and exact revenge against your tyrannical father and his witch. In order for you to do this  you are going to need some help, which is where your family sword, The Hyacinth, comes into play. The Hyacinth and other equipment can be used to defeat enemies and complete objectives. The Fire Bottle, your ranged weapon, must be filled by catching enemies fireballs or finding a container which holds fire. Lastly, the Invisibility Stone which allows you to quickly move past enemies at the cost of health. With these tools by your side and some platforming skills perhaps you can stand a chance!

Note: The main menu art and logo were created by my friend Wizardman. The artist does not have an itch.io account but, he does have a Redbubble account. You can view some of his other work here: https://www.redbubble.com/people/wizardman?ref=artist_title_name

Please feel free to leave some feedback below!

Wow! I really liked this!

There's a good sense of progression throughout the game. I like how you kept introducing new gameplay elements (such as the fire bottle) to keep the gameplay fresh. I also noticed some clever level design on how to approach certain enemies in tight spaces. Having the story progress through text boxes as you play is also a neat idea.
Some things to consider for future games:

- Keep the bottle consistent. There are enemies in the game that shoot orange fireballs that can't be captured with the bottle. This could end up confusing players. Either allow their fireballs to be captured, or change the fireball's color.

Other than that, that was a great first project! Good job Squidman!

I am happy you enjoyed those additional game play mechanics those were actually the most fun to make.  In terms of the level design, I tried to make them in a way that would teach you some of the things you can do without explicitly stating it.  I also had a decent amount of fun setting up the text boxes, but I felt I may have had too much story for this short of a game.

Regarding the invisibility power up, I thought it would be interesting to have a mechanic that sacrifices some health to hopefully not lose all of it. Thinking about it now there is really never a time to do something like that because whenever you lose health you take damage and become invisible anyway.

With the bottle,  I thought I kept it consistent I think I may have made the hit boxes too small for the fireballs.

Lastly, thankyou for the feedback and for playing through my game it really means a lot! 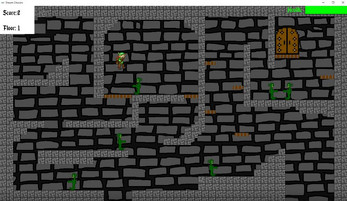 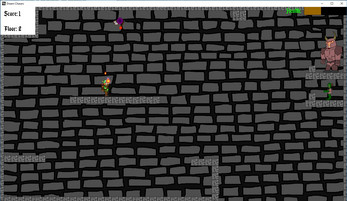 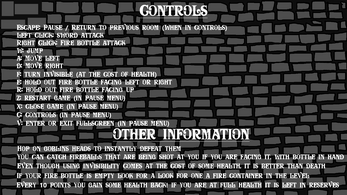